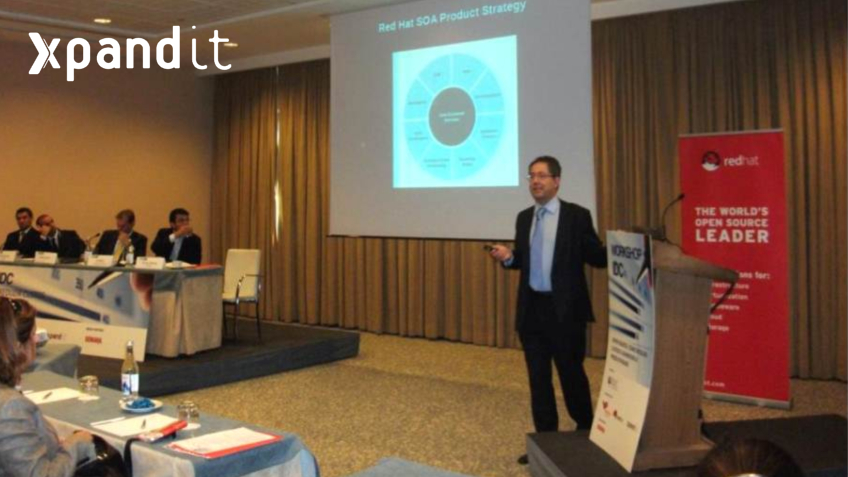 This award confirms Xpand IT superior performance in marketing initiatives and brand promotion in Portugal. The Event “Open Source: How to Reduce Costs and Increase Productivity”, developed by IDC Portugal and Xpand IT was one of the initiatives that motivated this distinction.

Xpand IT received on the 25th October, the award of “The Best Marketing Initiative 2012” by Red Hat Partners in the Iberian Peninsula. This recognition results from the successful partnership between Red Hat and Xpand IT, rewarding its superior performance and sense of commitment in Portuguese territory. With experienced and certified professionals, Xpand IT made several deployments of JBoss technology in Portuguese companies and had been growing as a Red Hat reference partner.

One of the most important activities that contributed to this award was the event “Open Source: How to Reduce Costs and Increase Productivity.” This initiative, organised with IDC Portugal took place on 5th June in Lisbon Sana Hotel and had Xpand IT and Red Hat as keynote speakers. In this event, many themes were discussed, namely role and value of Open Source Enterprise solutions in the current economic crisis scenario. Santiago Madruga – CEO of Red Hat Iberia discussed the theme “The JBoss way: Middleware open source added value”. From Xpand IT, Pedro Gonçalves – CTO – spoke about “Migration from proprietary middleware to JBoss.”

The relationship between Xpand IT and Red Hat Iberia has been fruitful, and both companies believe this strategic alliance to be a long term one. At the moment, there are already scheduled joint initiatives for 2013. Among the main actions planned will be new series of conferences, events and a continuous commitment to disseminate middleware solutions for Red Hat community in Portugal. JBoss User Group is already available onFacebook and Twitter, sponsored by Xpand IT, aimed at business leaders, business managers and technical teams, where some of the main news and Red Hat initiatives will be published.